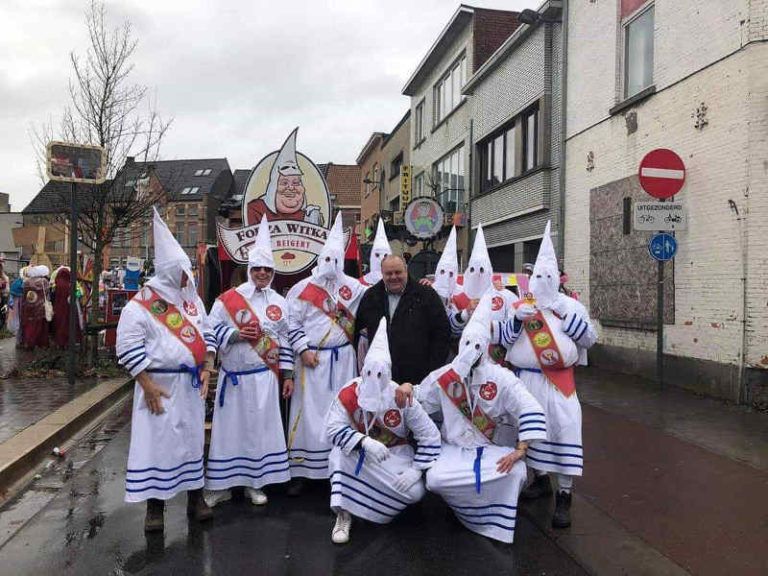 This Carnival has been talked about in recent years for hosting racist tanks (anti-Semitic and negrophobic).

In 2013, a tank represented a wagon similar to those used to deport Jews to death camps during the Holocaust. The tank designers paraded by his side disguised as SS officers or Orthodox Jews. On the wagon, a poster depicted Flemish politicians dressed in Nazis and holding tin cans containing Zyklon B, the poison used by the Nazis to exterminate the Jews in the gas chambers.

In 2019, another cart depicted caricatures of Orthodox Jews with hooked noses sitting on sacks of gold. This tank has angered several Jewish associations, including the Coordinating Committee of Jewish Organizations of Belgium (CCOJB) and the Forum der Joodse Organisaties (FJO). During this parade, participants could also be seen wearing the Ku Klux Klan members' white hood and dress, and others doing blackfaces. The Committee meets annually to evaluate nominations proposed by States Parties to the 2003 Convention and decide whether or not to inscribe those cultural practices and expressions of intangible ...

The Carnival of Aalst or Aalst Carnival is a yearly three-day event in the Belgian city of Aalst. It recognised by UNESCO as a Masterpiece of the Oral and Intangible Heritage of Humanity.

Video under the responsibility of the city of Aalst

The red line is outdated in the sense that this is the second incident in a few years knowing that this festival is inscribed on the Unesco Heritage, it is necessary to be aware of taking measures aimed at a process of suppression of this carnival of the UNESCO list because this carnival festival does not correspond at all to the required criteria of this inscription.

Antisemitic incident at the Carnival of Aalst. In 1940, the Nazis broadcast a propaganda film called The Eternal Jew. The use of morphological prejudices as a formidable tool of stigmatization of the Jew. I get indignant when some people systematically push back the limits of indecency. Already, on February 10, 2013, during the 85th Aalst Carnival, event recognized since 2010 intangible heritage of humanity by UNESCO, was scrolling an SS-VA tank intended for "the deportation of the francophones". The banalization, even carnivalesque, of anti-Semitism and therefore of the Holocaust is an insult to the memory of the victims.

The Coordinating Committee of Jewish Organizations of Belgium (CCOJB) and the Forum der Joodse Organisaties (FJO) join forces to express their anger and misunderstanding at the puppets of Jews with hooked noses and the chests full of money that marched during Carnival of Aalst.

At best, it is a disgraceful lack of discernment, especially given the rising context of anti-Semitism in our country and the world, at worst the reproduction of antisemitic caricatures worthy of the Nazi era. Jewish anti-Semitic cartoons marched in the UNESCO classified Belgian carnival. The Mayor of Aalst, Christoph D'Haese, has not yet commented on the incident. UNESCO condemns the racist and anti-Semitic representations at the Carnival in Aalst, Belgium, on 3 March

We call on the Belgian authorities to react to the recent transgressions that occurred at the Aalst Carnival, an element inscribed on the Representative List of the Intangible Cultural Heritage of ...

We call on the Belgian authorities to react to the recent transgressions that occurred at the Aalst Carnival, an element inscribed on the Representative List of the Intangible Cultural Heritage of Humanity since 2010. "The satirical spirit of the Aalst Carnival and freedom of expression cannot serve as a screen for such manifestations of hatred," said Ernesto Ottone R., Assistant UNESCO Director-General for Culture. "These indecent caricatures go against the values of respect and dignity embodied by UNESCO and are counter to the principles that underpin the intangible heritage of humanity, "he added.